Representing: Manufacturers, installers, or suppliers of building materials (East of the Cascade Crest.)

After serving in the U.S. Marine Corps from 1969 to 1972, Al moved to Moscow, Idaho to attend the University of Idaho where he received his Bachelor of Architecture degree with a minor in Business Finance in 1977. Prior to his election to the Spokane City Council in 2002, Al served on numerous boards and commissions throughout the region, especially donating his service and expertise to neighborhood committees in Spokane. Al has more than 30 years experience as a successful businessman, architect, investment consultant, and developer in the Spokane region. He has both attracted and assisted new businesses in the region uses that experience in his roles as a Spokane County Commissioner.

Diane Glenn has spent her entire adult career working in the construction industry. She works in Washington and other western states to meet the needs of the contractors and project owners seeking greater quality in their construction practices by offering various inspection services, builder consulting services and training.
As owner of Construction Consultants of Washington, Diane works closely with builders to assure quality projects and compliance with building codes, regulations and the Condominium Act.  She teaches classes and presents seminars on several topics of the industry including building codes.

Andrew Klein, PE, has been involved in national-level standards committee and code development work for the past 10 years. As a dually-licensed Chemical and Fire Protection Engineer, Mr. Klein's specialty is the development and application of codes for high-hazard occupancy facilities including associated processes and storage. As energy management grew as a primary focus of facility managers and developers, Mr. Klein's responsibilities expanded to also include energy code compliance, a topic on which he has authored books and lectured extensively. Mr. Klein is also passionate about helping to ensure a vibrant economy in Eastern Washington, where he sits on the board of the Benton-Franklin Economic Development District.

Phillip Lemley is a member of the Richland City Council, currently serving in his third term. He has served as Mayor Pro Tem, and is liaison to eight different local boards and commissions. He serves on the Washington State Council on Aging and the 8 County SE Washington Aging and Long Term Car Council of Governments. He retired from Bechtel National Inc. in 2010, having worked all over the world and across the US in the telecommunications industry. His last project was the vitrification waste treatment plant at Hanford, as the responsible project engineer for the plant-wide data, voice, public address and building emergency evacuation, electronic access control and wireless network systems. He is also a licensed private pilot, Rotarian and former member of the USMC. He attended the University of Arkansas-Little Rock. He volunteers at the Kadlec Medical Center, Richland Food Bank and Richland's Volunteers in Police Services.

Kevin Shutty is serving his first term as Mason County Commissioner, and currently serves as Chair of the Board of County Commissioners (BOCC) and on a variety of regional planning, environmental and public safety committees. Prior to serving on the BOCC, Kevin worked as a Public Information Officer and Outreach Coordinator for the Washington State House of Representatives, where he also previously served as Legislative Assistant. Kevin has served as a member of the Mason County Planning Advisory Commission and Vice Chair of the North Mason Chamber of Commerce Government Affairs Committee. He holds a Bachelor's of Science in Secondary Education and is completing a Masters in Community and Economic Development, both from Penn State University. Kevin and his wife Catherine reside in Union, Washington.

Mike Chapman served for a decade as a local law enforcement officer and U.S. Customs Inspector. He then served four terms as a Clallam County Commissioner.

He received his master’s degree in Leadership and Liberal Studies from Duquesne University, his bachelor’s in Organizational Management from Northwest College and his Associates of Arts and Sciences from Shoreline College.

His volunteer and civic involvement includes:

Mike lives in Port Angeles with his wife of 27 years, Bobbi, and together they have two sons, Larsson and Anders, both in college. 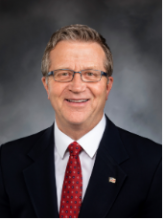 Rep. Larry Hoff is serving his first term representing Southwest Washington's 18th Legislative District, where he has lived for more than 40 years.

Larry grew up in a small North Dakota town, and joined the Navy after graduating from high school. Upon leaving the service, he enrolled at the University of North Dakota, where he earned a B.S. in Accounting. He then moved to Clark County, and soon joined the credit union industry as interim CEO for Columbia Credit Union (CCU).

After serving at CCU for more than 12 years, he became CEO of Electra Central Credit Union. Seven years later, he was hired as CEO of the Fibre Federal Credit Union, an institution he grew from $400 million to $1 billion before retiring in January 2017.

Larry's successful business background led to his appointment as the assistant ranking member of the House Consumer Protection and Business Committee. The committee considers an array of consumer protection issues, as well as the safety and soundness of state banks and credit unions, the regulation of consumer credit and lending, and the regulation of securities and investments.

He also serves on the House Appropriations Committee, which considers the operating budget, budget processes, and fiscal issues such as pension policy and compensation. He also serves on the House Labor and Workplace Standards Committee, which reviews all legislation related to industrial insurance, unemployment compensation, collective bargaining, family leave, safety and health standards, occupational health, and employment standards.

Larry currently lives in Vancouver with his wife Renee. They have one son and one grandson. The Hoff's celebrated their 47th wedding anniversary in December 2018.

Sen. Joe Nguyen was born in White Center, raised in Burien and currently lives in West Seattle. His experiences growing up in an immigrant community as the son of Vietnamese refugees and being raised by a single mother informs much of his service today.

He is the chair of Wellspring Family Services’ Associate Board, which works on issues related to family homelessness and is committed to housing 2,000 children and their families in the next two years. Part of the board’s work includes advocacy, and we were able to pass Wellspring’s first bill (HB2861) providing support for trauma-informed care, which was signed by the Governor in the 2018 session.

Nguyen is also involved in police relations as a member of the Community Advisory Committee for the Office of Law Enforcement Oversight in King County. His work focuses on building bridges between community and law enforcement to achieve equitable policing.

He is a Senior Manager at Microsoft and lives in West Seattle with his wife Tallie, a special education teacher in the Highline Public School District, and their two children, ages 1 and 3.